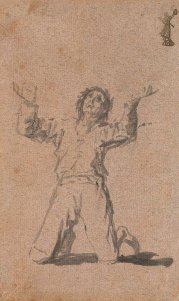 In this drawing by Francisco Goya, ‘Prayer’ 1800’s, water colour on rag paper, a pathetic figure, a man, his face haggard and weary, kneels before us, it is as if he has only recently collapsed, and is unable to stand on his feet any longer. His arms are raised, open and submissive. His head leans back and he looks upwards as if pleading. Praying though as the title suggests seems to me far from his thoughts, it is mercy his bedraggled figure seeks. His posture is more akin to pleading with mortal oppressors, rather than the meditative act of kneeling to ask ones God for help. The drawing portrays utter desperation to the point of sacrifice, the person can go on no longer, take no more of whatever it is, assumingly war and its associated mess. This drawing is probably a provisional study for a print in Goya’s’ Disasters of War’ series it is rendered effortlessly in as few strokes as is necessary to represent the figures dramatic pose. It is made with a light touch and the redness of the paper lends atmosphere to the subject. Goya’s disasters series are now familiar to anyone with an interest in the history of contemporary art, they are broadly influential. I find them too depressing to look at with any regularity, I much prefer the Los Caprichos series which although still dark and brutal, have humour and are in many cases ridiculous and banal and much more modern and innovative because of this. I also prefer looking at his drawings rather than his prints, they are looser, often fragmented and more ambiguous, and they are also obviously closer to the artists hand and therefore his thought. This drawing denotes an isolated moment of humanity at its most pathetic. Today when we are constantly fed the desperation of others displaced by war in some or other way, we have perhaps become desensitised to this kind of image and indeed much more graphic imagery of those for whom the point of desperation has passed, given way to an inevitable horror. It is perhaps a guilty pleasure to look at war in this way, a drawing softens the blow, gives an opportunity for distraction from the real. In a drawing we can always see something else, beauty where we least expect it.