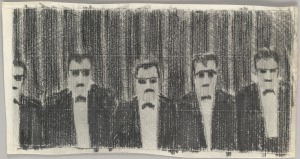 Franz Wests drawing of five moustachioed men with quiffs in tuxedos is typically droll and deadpan. Deadpan could in fact describe West’s entire artistic output, as well as, in what is evident in many photographs of the artist, his own facial expression. The men portrayed here could quite easily be either clowns or gangsters; they look both intimidating and friendly, ridiculous in their uniform attire and passive posture. The drawing brings to mind the opening scene of ‘reservoir dogs’, the film director Quentin Tarantino’s early triumph and the figures contain that same combination of camaraderie and menace that the characters in the film have. The drawing has the grainy and smudged quality of old black and white film and the width of the paper is itself cinematic in its aspect ratio. Untitled 1973, pencil on paper, 10.2 x 19.4cm is made on what looks like a reused piece of paper that either has a striped texture or the drawing was made over something with a striped texture that gives the background the quality of a rubbing. The pencil is soft. The paper has an uneven border, it might have been previously stretched or folded. In many ways the drawing is too straight forward and formal but it still contains West’s signature combination of humour and irreverence. Despite its simplicity the drawing has a lot of detail, the men are uniformed in more ways than one, but are also individuals; different heights, hair slightly different, one moustache bushier than the next, different shaped sunglasses. They are throwbacks, Edwardians, Teds in the 70’s, middle aged out of place has-beens. They stand before what looks like a theatre curtain, they could easily be musicians acknowledging applause. This drawing is early but still in keeping with the rest of the artist’s work, it seems spontaneous and effortless, it is easy going. West seems a very singular artist, I can’t think of other artists that make work like him. It’s as if throughout his career and life he looked at what was going on at the cutting edge of art, then did exactly the opposite, poking fun, knowing the secret, being in on the joke. We are left to wonder while he has the last laugh.